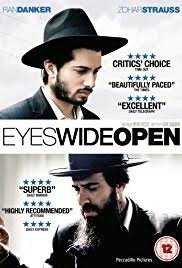 A homosexual love story set in the Ultra Ortodox Jewish community in Jerusalem.

Aaron is a respectable butcher and a member of the Ultra Orthodox Jewish community in Jerusalem. A harsh rainstorm brings to his shop a handsome and homeless Yeshiva student named Ezri. Aaron takes pity on Ezri's and decides to be his patron. He hires him to work in his butcher shop, teaches Ezri the craft of slaughtering, and houses him in the shop’s back room. One day, when they go to a remote "Mikve" (a scared ritual bath) an intimate moment occurs between them, and they make love. From this moment onwards, Aaron knows no peace. He develops deep feelings towards Ezri, and he slowly neglects his family. However, he feels immense guilt and torment which he expresses in physical rituals of self-punishment. When his wife reveals this affair, he is put under the enormous pressure and reaches a decision to commit an irreversible act…